The World Health Organization (WHO) has released their list of the top 10 major threats to world health in 2019. Here are 10 health threats you should be aware of in the coming year.

Vaccine hesitancy is defined as reluctance or refusal to vaccinate despite the availability of vaccines, and the anti-vax movement threatens to reverse progress made to eradicate vaccine-preventable diseases. Vaccines prevent between 2 million and 3 million deaths every year, and another 1.5 million lives could be spared if vaccine complacency were to improve.

Measles has seen a 30 percent global increase over the past three years and has caused an estimated 110,000 deaths, although measles vaccination saves 21 million lives every year. Reasons people don’t vaccinate include the spread of misinformation, complacency, inconvenience in accessing vaccines, and lack of confidence in the vaccines themselves.

Healthcare workers remain the most reliable sources of information on these life-saving vaccines and should be trusted to provide credible information on vaccines.

The WHO considers air pollution to be the greatest environmental risk to world health. Ninety percent of the global population breathes polluted air every day, and 7 million people die prematurely from polluted air every year. The majority of these deaths occur in low- and middle-income countries. Air pollution is often caused by high volumes of emissions from industry, transportation, and agriculture. Burning fossil fuels is the primary cause of air pollution and leads to climate change.

Climate change is expected to cause 250,000 additional deaths between 2030 and 2050 due to malnutrition, malaria, diarrhea, and heat stress. This year, the United Nations Climate Summit will attempt to strengthen action against climate change. Even if all countries within the Paris Agreement (every country except the United States) stay on course, the planet will still warm by a catastrophic 3 degrees Celsius.

The global spread of influenza (flu) is the most unpredictable world health threat on the list. The WHO expects another pandemic (possibly soon), but cannot predict when it will occur, how severe the outbreak will be, or how widely it will spread. So far in the 2018-19 flu season, an estimated 6.2 million to 7.3 million people have developed the disease. Every year, the WHO works with scientists to predict which strains of the flu will spread in order to create the necessary vaccines.

4. Ebola and other pathogens

The Democratic Republic of Congo saw two Ebola outbreaks last year, which spread to cities with populations of 1 million people or more. Diseases like Ebola are easier to contain when they are limited to rural areas and can devastate communities of high density.

The WHO also added several other pathogens to their watchlist that could cause a world health emergency, including Zika, Nipah, Middle East respiratory syndrome coronavirus (MERS-CoV), SARS, and disease X. Disease X is a placeholder for an unknown disease that could spread throughout a population.

Non-communicable, chronic diseases like cancer, heart disease, and diabetes account for 70 percent of deaths worldwide each year. This equals about 41 million people, and around 15 million of them die prematurely (between the ages of 30 and 69). The global increase in these diseases is driven by tobacco use, lack of physical activity, excessive drinking, poor diets, and air pollution. The WHO wants to work alongside governments to increase physical activity levels by 15 percent by 2030. 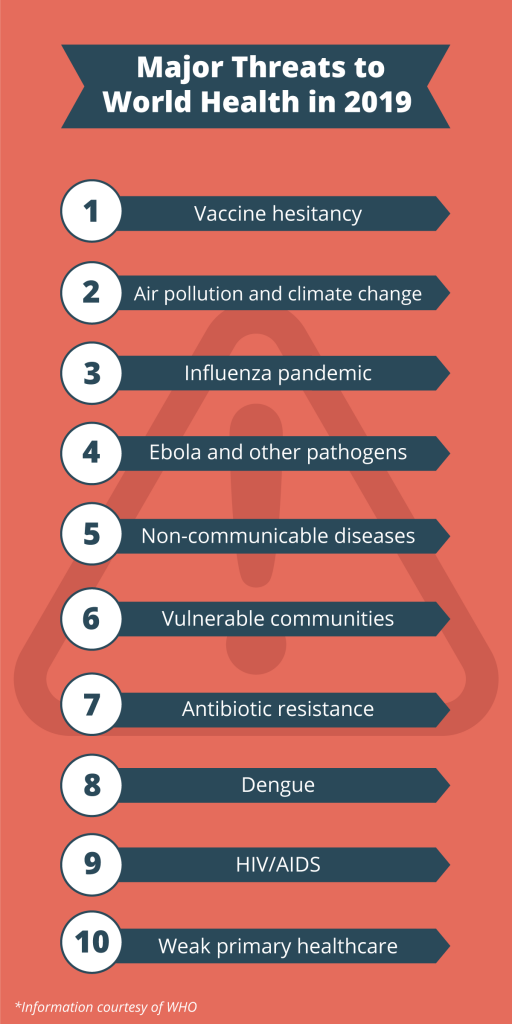 About 22 percent of the world’s population lives in vulnerable communities. These areas often lack funding and infrastructure, and can be devastated by drought, famine, conflict, population displacement, and weak healthcare systems.

Antibiotic (or antimicrobial) resistance is one of the biggest threats to human health. The discovery of antibiotics was one of the biggest scientific breakthroughs of the 20th century, but overuse in both humans and animals has caused large swaths of the global population to develop immunities to them. These antibiotics are used to treat infections like pneumonia, tuberculosis, and salmonellosis. Without effective antibiotics, patients undergoing immuno-compromising treatments like chemotherapy could be at risk during surgeries and procedures.

Nearly half of the global population is at risk of being infected with this mosquito-borne illness. Severe forms can kill up to 20 percent of people infected with it. It causes flu-like symptoms, and mainly occurs in tropic and subtropical regions (like Bangladesh and India) during rainy seasons. However, Nepal, a country that previously had not seen cases of dengue, has seen an increase in cases in recent years. By 2020, the WHO aims to reduce dengue deaths by 50 percent with their dengue control strategy.

Scientists have made enormous progress against HIV/AIDS since the deadliest outbreak in the 1980s. Since this epidemic, more than 70 million people have acquired this disease, and around 35 million have died.

One hindrance is attempting to do research on minority groups traditionally excluded from many healthcare systems, like sex workers, people in prisons, men who have sex with other men, and transgender individuals.

Despite all of this progress, around 1 million people still die from HIV/AIDS every year. A group with disproportionate rates of diagnosis is young women (15-24 years-old) in sub-Saharan Africa who account for 25 percent of the cases despite only being 10 percent of the African population.