Native Americans are 50 percent more likely to be obese than non-Hispanic whites, as well as two to three times more likely to have type 2 diabetes than Caucasians. In addition, Native populations are more likely to suffer from heart disease, alcoholism, mental health conditions, asthma, chronic liver disease, and bile duct cancer. Native American youth, whose rate of diabetes is growing faster than any other ethnic group, have high risks for depression, chronic disease, substance abuse, and suicide.

The national average life expectancy for a Native American born today is 73 years, 5.5 years below the average for all other races. Life expectancy in the Navajo nation is just 57 years old. 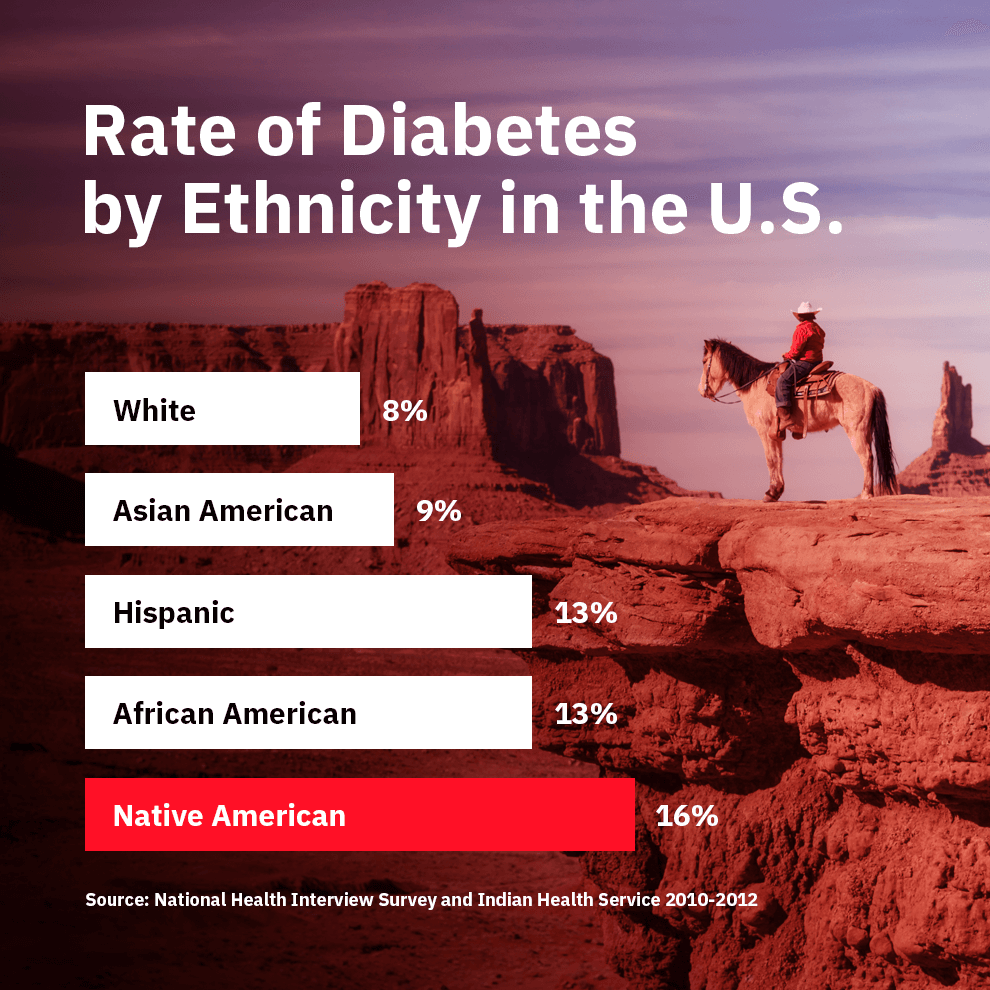 Since World War II, Native Americans were relocated to reservations where they had little access to healthy foods, no farmland, and were only supplied with processed, canned foods and fast food chains. Staples that were given to many reservations included flour, lard, canned vegetables, and powdered milk.

Traditionally, indigenous people harvested and caught food that caused them to travel miles by foot. On reservations, they suddenly led a more sedentary lifestyle, with long bus rides to school and hours of TV watching.

Then in the 1950s and 1960s, there was a government relocation program that tried to get Native Americans jobs in cities, however that program failed. Many Native Americans who moved to urban areas faced discrimination and a lack of spiritual community, as well as a lack of job opportunities.

Shervin Aazami, deputy director of congressional relations at the National Indian Health Board, said, “Acts of physical and cultural genocide, forced relocation from ancestral lands, involuntary assimilation into Western culture and persecution and outlawing of traditional ways of life, religion and language, have resulted in disproportionately higher rates of health problems among the Native community.”

Even institutions like Indian Health Services (IHS), which are supposed to provide healthcare to Native Americans, fail in certain areas. In North Dakota, the IHS hospitals have high death and mistreatment rates. Funding for the IHS was around $5.8 billion in 2019, when it should be more like $37 billion, according to Aazami. In fact, some Native Americans are for eliminating the IHS and providing their own health services.

There are programs, like the CDC’s Good Health and Wellness in Indian Country and the Special Diabetes Program, that are helping to reduce ESRD and diabetic eye disease in Native populations. The Navajo Nation also put a 2 percent tax on junk food in 2014. The IHS has helped to reduce kidney failure in indigenous populations over time, and many American universities are researching and acting on ways to make a change.

Although there have been some improvements, the physical and mental health of indigenous populations is still a major problem that needs to be addressed.